Join TSOA in celebrating Black History Month! Black History Month is an annual recognition of the history, achievements, and influence of the Black community. Since 1976, each president of the United States has designated February as Black History Month. The origin of Black History Month can be traced ever further back to 1915, when an organization call the ASALH, led by Harvard-educated historian Carter G. Woodson was formed. The ASALH dedicated its time to researching the achievements of Black Americans and other people of African descent. in 1926, the ASALH sponsored a Negro History Week and chose the second week of February to recognize the birth dates of Abraham Lincoln and Frederick Douglass. The goal was to inspire schools and communities across the United States to organize local celebrations, activities, and lectures in an effort to teach Black history as it had never been taught before. Today, Black History Month is also celebrated in other countries around the world, including Canada (who celebrates in February) and the UK (who celebrates in October).
Join us in celebrating just a few of the many inspiring Black creators and inventors!
Madam C.J. Walker (1867-1919, pictured below) was an entrepreneur, philanthropist and activist who rose from poverty in the South to become one of the wealthiest African American women of her time. She used her position to advocate for the advancement of black Americans and for an end to lynching. Throughout her life, Madam Walker worked as a laundress, cook, sales agent and ultimately started her own company. “Madam Walker’s Wonderful Hair Grower” employed over 40,000 African American men and women in the US, Central America and the Caribbean. She also founded the National Negro Cosmetics Manufacturers Association in 1917. Walker’s business went on to top $500,000 in sales bringing her worth to over $1 million dollars. Walker donated much of her company’s profits to education scholarships, the YMCA, individuals and schools.
Who doesn’t love ice cream and peanuts?!
Alfred L. Cralle (1866-1920), African American businessman and inventor, invented and patented the ice cream scooper in 1897 after noticing the difficulties the hotel waiters had serving ice cream.
George Washington Carver (1864-1943), African American agricultural scientist and inventor who promoted alternative crops to cotton and methods to prevent soil depletion. Carver wanted poor farmers to grow other crops such as peanuts and sweet potatoes as a source of their own food and to improve their quality of life.. The most popular of his 44 practical bulletins for farmers contained 105 food recipes using peanuts! He was the most prominent black scientist of the early 20th century and is renowned for his work promoting environmentalism.
TSOA also celebrates African American inventors and creators in our own industry, Transportation. Every time you travel down a clean street, take a breath of fresh air, or use public transportation, you should thank an inventor. While you’ve probably grown so accustomed to these luxuries, transportation wouldn’t be the same without the following African American inventors and their research.

Elbert R. Robinson refined the electric railway trolley. In 1839, Elbert Robinson, a resident of Nashville, TN, received a patent for improvements in trolleys for electric railways. His invention focused primarily on the trolley wheels, implementing a new design to secure wheels to the wire when the trolley rounded curves or went down hills.

Charles Brooks invented the first self-propelled street sweepers. In his day, the main method of transportation resulted in piles of horse manure along the street. As you can imagine, it was not a pleasant-smelling situation. While the horse-drawn street sweeper had already been invented, Brooks wanted to improve upon it. His design utilized a truck-like frame with revolving brushes that pushed waste into a bin, and he received a patent for his invention in 1896.

Frederick McKinley Jones developed air conditioning for truck and railroad transportation of food. After running away at the age of 11 to live on his own, Jones used his spare time between odd jobs to teach himself mechanical and electrical engineering, which would lead him to a life of profitable inventions. In the 1930s, he designed air conditioning for vehicles carrying perishable foods. So, you can thank him next time you purchase a frozen pizza or a pint of ice cream at your grocery store!

Meredith Gourdine developed the exhaust purification system. When his father told him that an education could spare him from a life of manual labor, he changed the course of his son’s life. After graduating from Cornell and opening his own research laboratory, Gourdine went on to develop an exhaust purification system for cars in 1967. His invention is now referred to as the catalytic converter and it helps to reduce harmful emissions into the environment, minimizing the pollution caused by our vehicles. 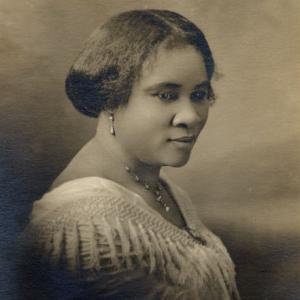